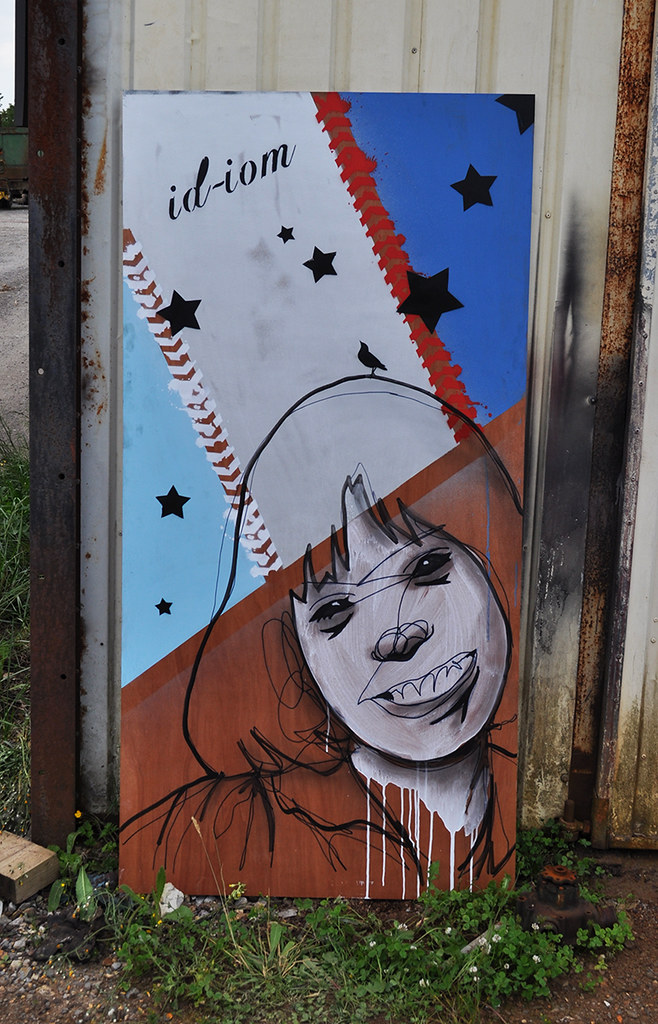 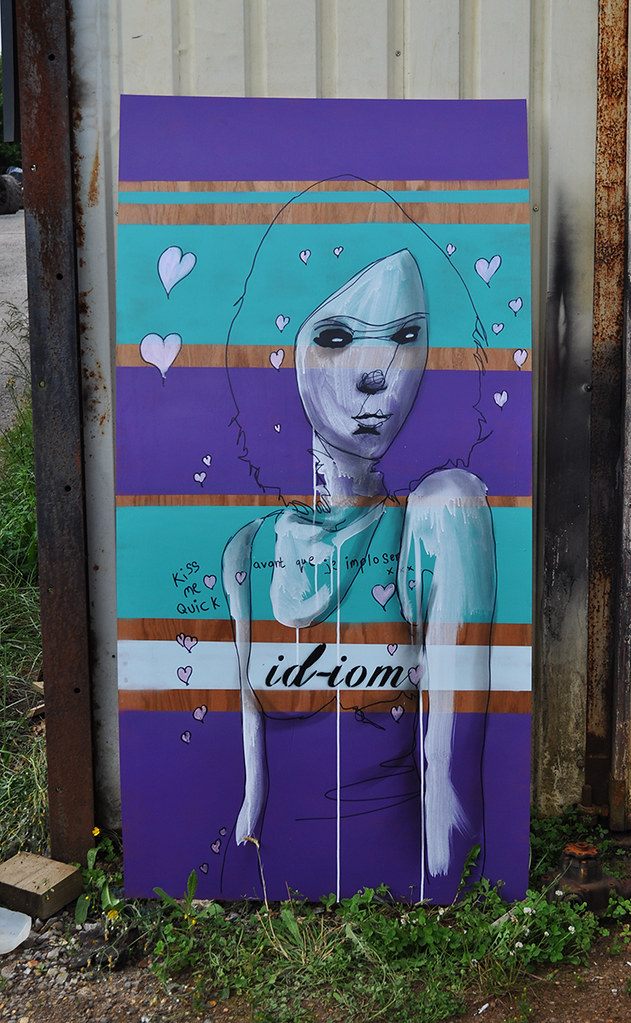 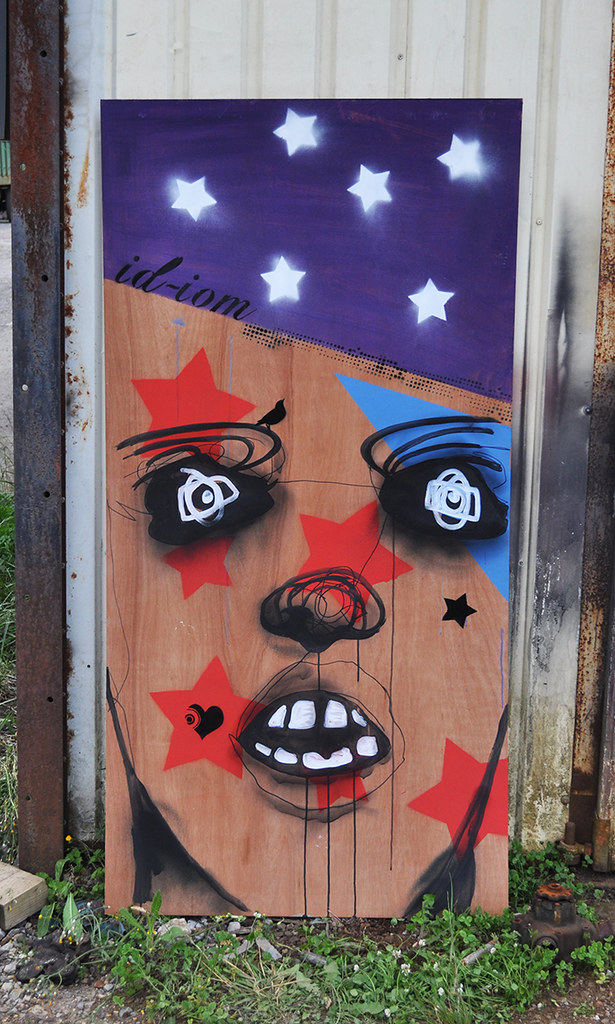 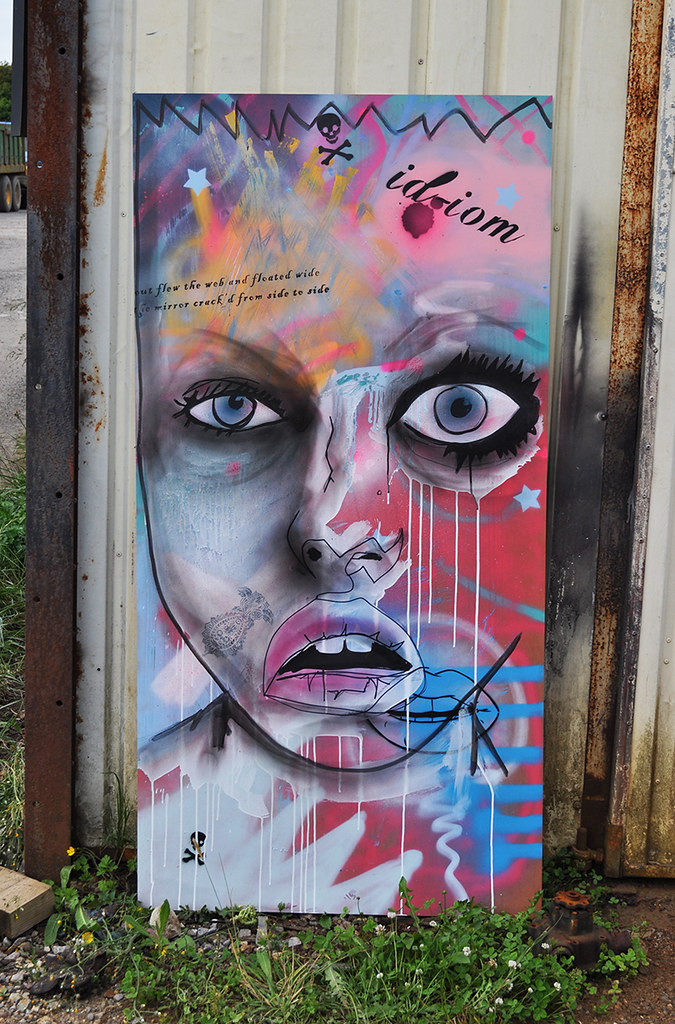 Lips so nice we did ’em twice

Soooooo, it’s Friday and we’re off to the Isle of Wight festival to do a bit of djing. What a lovely day for it. Anyway, i digress. If you haven’t been paying attention then a brief recap is probably in order. Here it goes –  we went down to Somerset to paint some boards for Pootopia who provide toilets at festivals.  They have hundreds of compostable toilets and are beautifying them with some artwork on boards which fit into the toilet doors. Which is where we came in. We set ourselves a somewhat ambitious target of completing 40 boards over the weekend. Despite working just about as hard as we could we only managed a final tally of 32 completed boards (with 7 left just as backgrounds and one MIA). Not too shabby if i say so myself. The hard part was trying to make it so they didn’t all look too similar.

Today I present to you our sixth set of boards and I can see the finish line from here. Right, cats to herd and curtains to iron. Toodle pip for now…

Welcome to WordPress. This is your first post. Edit or delete it, then start blogging!

Not just a blackened heart 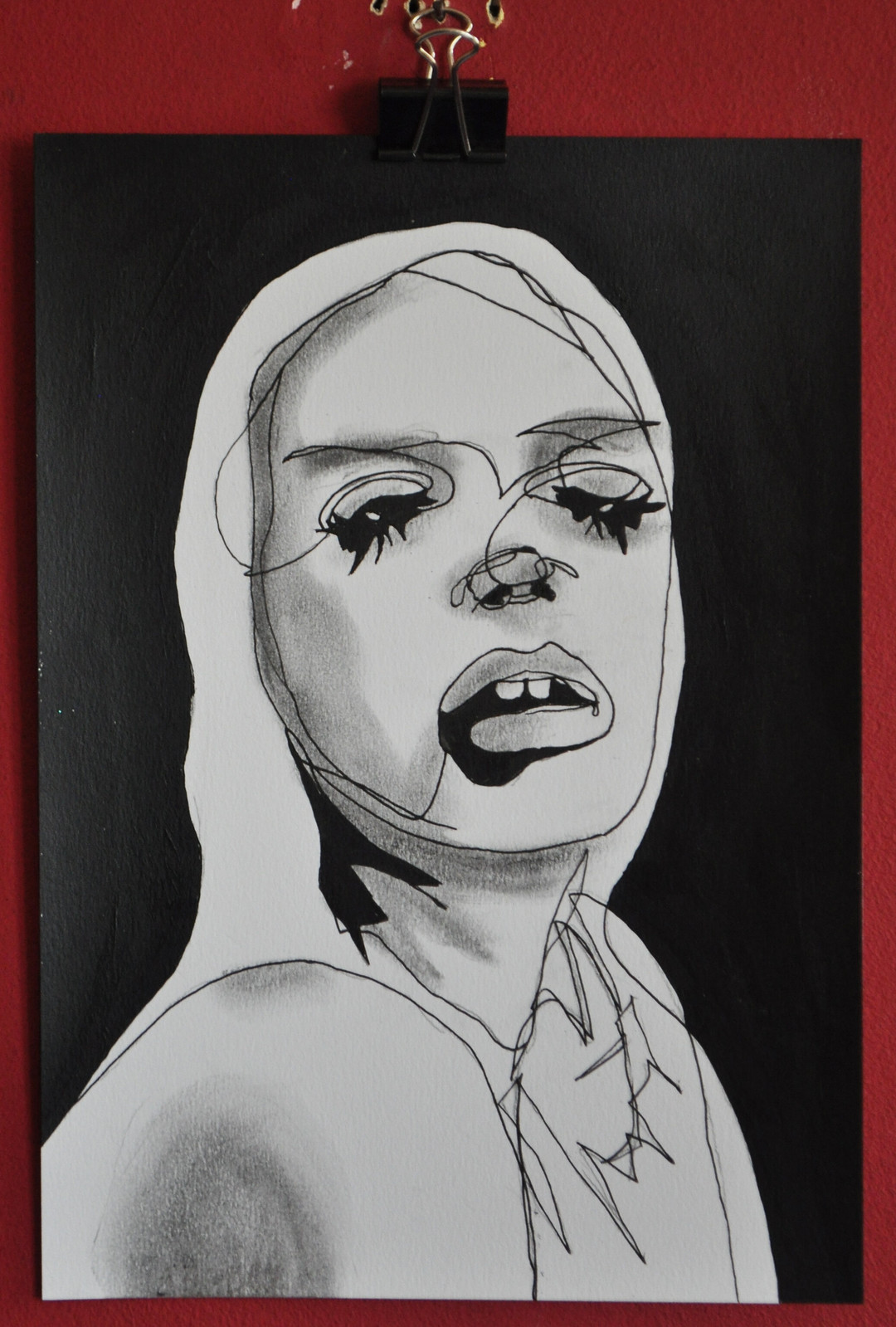 Not just a blackened heart

Now this young lady not only has a blackened heart but she’s also in possession of a slightly charred soul. How did one so young come to have both I can almost hear you ask? Well it’s something of a long and convoluted story and I don’t know the half of it. All I can say for sure is she’s not one to be messed with. At all. There’s all kinds of hearsay regarding her murky past and it’s difficult to be sure what parts are true and what are just rumour. An abridged version of her story can probably get all the salient points across without indulging in too much unverified gossip – so if you catch me when i’m out and about and want to buy me a drink I’ll tell you an interesting story…

If you hate everything… I’ve always liked to imagine that the Manic Street Preachers’ 1998 song ‘If you tolerate this your children will be next‘ was about the Daily Mail and the fact that if we’re not careful they’ll be putting out a daily junior edition to indoctrinate our children into their radicalised nonsensical thinking.

Then before you can say ‘Social websites harm a child’s brain!’ we’ll all be making highly judgemental knee jerk reactions to every possible scenario, whether we know a single thing about it or not. This would inevitably lead to a catastrophic chain of events whereby most of the UK population would become diehard Daily Mail readers and we’d become a totalitarian police state. id-iom would then have to raise a resistance army made up from the hardy few who experienced a serious case of cognitive dissonance on perusing the Mail. I can only imagine the resulting conflict would be much like the film ‘Red Dawn‘ (the 1984 version not the 2012 version) and we’d eventually rise triumphant in some bleak alternate universe.

After a quick bit of internet research it actually turns out that the song is actually about the Spanish Civil War. Apart from that however I’d like to think my imagined story still holds true. If you haven’t read the Daily Mail and generally disklike everything in life then maybe, just maybe, you should give it a go. Anyway, what else was I meant to do with a copy of the Daily Mail? So, it’s round 2 for our newest session at the White Horse. This time we had the pleasure of repainting the corridor in the gents toilet after the painters accidentally painted over the last mural we did in there when they were in redecorating. D’oh! The buff man comes in many guises it would seem.

Seeing as it is the gents toilet in a bar we decided something a little risque might well be in order and after a little deliberation came up with a cheeky little number inspired by Vargas’ pin up girls imagery. She’s a proud lady with a certain ‘come hither’ look in her eyes but most of all she’s proud of her little black stole. And she hopes you like it too. Whoops! Looks like it’s slipped a little… War! What is it good for? Absolutely nothing! Say it again! – so sang Edwin Starr in 1970 on the anti-Vietnam song ‘War’ (which, i was interested to learn was originally recorded by The Temptations but not released as they didn’t want to alienate their more conservative fans). Today’s piece is something of homage to the pointlessness of war and was inspired by the poem ‘Futility’ by Wilfred Owen which is about life and death in the trenches of France during World War One and the futility of the whole situation. Hopefully our piece reflects at least an echo of that sentiment.

Righto, that’s enough highfalutin seriousness for today. We’ll hopefully be back to our usual broadcast of gibberish tomorrow… This slightly sinister looking raven (or is he a large crow?) has found a sparkly pile of carbonado (or ‘black diamonds’ to you and I). The photo doesn’t really do it justice but there’s a load of glitter on those there stones and that’s what attracted him in the first place, as he has some magpie blood in him on his mother’s side. He knows their value and he’s prepared to defend them. With as much force as he can muster. Which could be quite a lot considering his size, evil looking red eye and imperious pose. I’d just leave him to it if I were you…

We are all fools for love It’s been over a year in the making (mainly because we’re so lazy) but we can finally reveal our huge edition of 2 (well 3 if you count the landscape one that is currently being hand finished) of our piece which was originally a large scale piece done at UPfest in 2012. They’re a combination of screen printing, stencils, spraypaint and a little hand finishing. The picture was based on a photo of a friend and I’m glad to say she has seen the piece since it was done and given it her blessing. I think the message is clear enough that no matter how tough we think we are love can make a fool of us all. Amen to that.

Title: We are all fools for love
Materials: Screen print, stencils, spraypaint and paint pen
Size: A3

How can i tell her? This image is based on a big wall we did for the Big Draw a few years ago and I recently came across most of the necessary stencils for a smaller version that have been hidden away for a good while and so decided to put them to good use on a couple of canvases once the extra bits that were needed had been cut.

I think my favourite aspect of this picture is his desperation at his inability to tell her that they aren’t really lovers and are, in fact, just stencils. Life can be tough, can’t it?

Title: How can i tell her?
Materials: stencils and spraypaint
Size: 40 x 30 cm canvas

On Saturday we packed up the id-iomobile with just about as much stuff as we could get in there (as we never like to travel light and be without something we may need) and headed for Peterborough for the Overground Arts paint jam. This collaboration piece was actually our second piece of the day and was painted alongside the ever affable Parlee. Our barely thought out plan was to have Parlee’s ‘Rocket’ character being attacked by our large and angry looking Godzilla. As we progressed we thought what better than having Rocket deal with two Godzilla’s – both of which were now to be sporting laser eyes. Whilst Rocket seems to be defending himself from the blasts his little fly companion seems to have suffered a direct hit. If it wasn’t for those pesky Godzillas…

We also had some added assistance from Process Smith in creating the clouds and rather surprised looking budgie at the bottom and Miss Wah for the kind loan of her bunny skull stencil which we turned into a little swarm of flying bunny skulls hovering near Godzillas’ head. Their intentions aren’t entirely clear but i suspect them to be evil.

Our ‘l’esprit de l’escalier’ moment came when driving back and we thought we should probably have added some parachute lines to Rocket. Ah well, c’est la vie…