It’s not all work, work, work here at id-iom HQ. With Bonfire Night fast approaching I took our little Manx cat aside and tried to have a quiet word with her about how dangerous and scary fireworks can be for small cats that have never experienced it before and how I thought it best that she perhaps stay inside for tonight and Saturday. Before I had even finished speaking she glanced at me contemptuously and darted out through the cat flap. When she finally came back in I thought that perhaps writing the rules down would work but she merely gave me a knowing look and started to play with the sheet of paper. Finally i decided enough was enough and I would create a Cat No Exit sign that blocked the cat flap as I fear that if i merely locked it she would get mightily confused. Here she is trying to devise a way past it all the same… 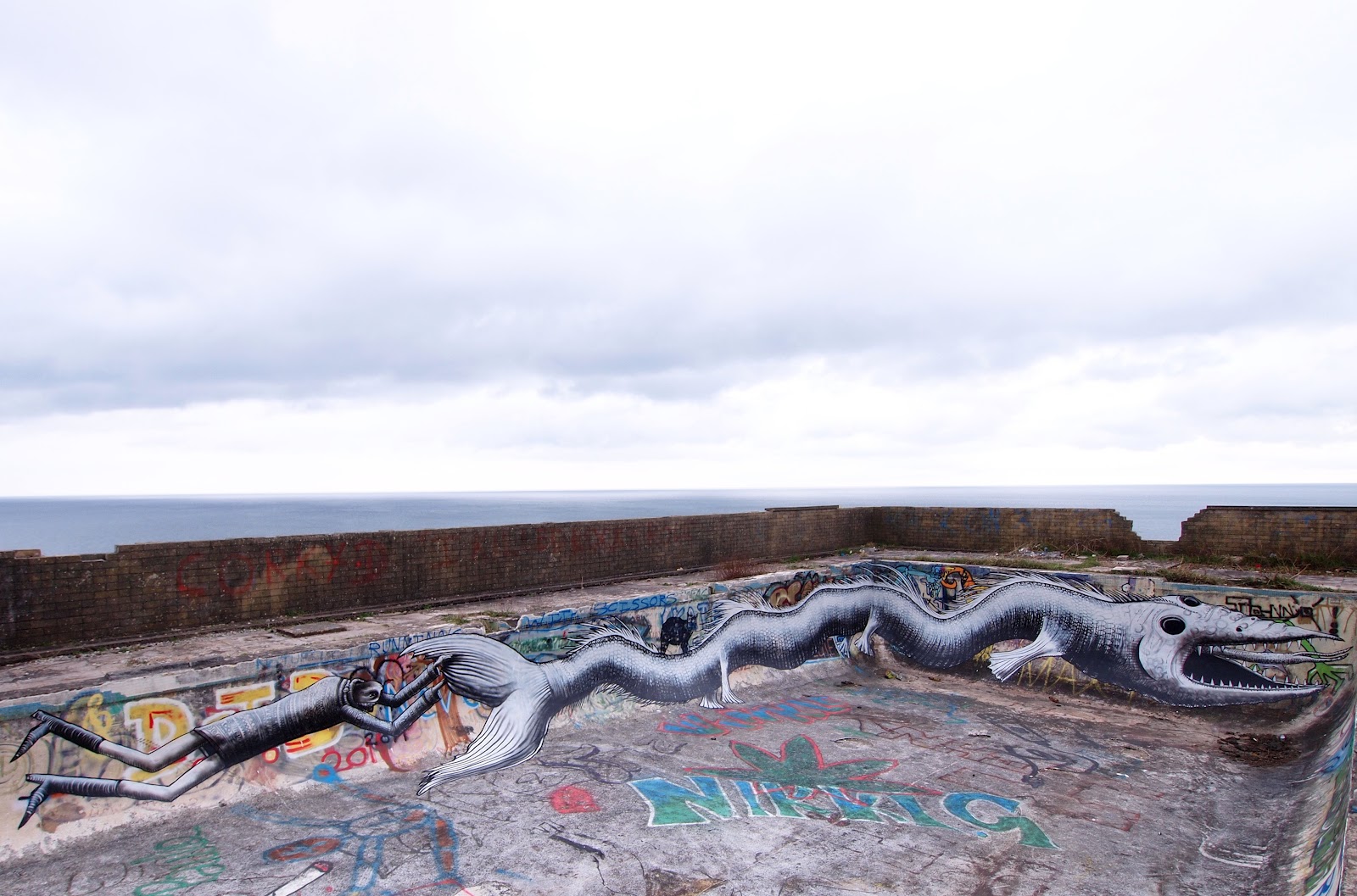 There I was doing my daily round of the internet and all the wonders contained within when I come across the piece above – done recently by Phlegm on the wonderful Isle of Man (where we are from). I was a little surprised and not just because the Island is hardly known for it’s liberal attitude towards public displays of unsanctioned art. It was because Phlegm had incorporated our Manx cat stencil from 2008 into his new piece. Rather than appearing adrift on a jumbled backdrop of graffiti our cat now appears to have taken his righteous place in the grand scheme of things and is riding the sea serpent on a wondrous journey round the abandoned swimming pool. I think all i can do is commend us on having the foresight to place our cat in the position when it would one day be riding a sea serpent… After our successful venture to Mannifest (see here) we were approached  as regards an interview for the Manx Independent, a newspaper on the Isle of Man. Being the fame hungry slack-jaw’s we are we jumped at the chance and proceeded to pour our hearts out to the inquisitive reporter.  After a little cajoling i even included a picture of us (well, it’s an illustration) but that was as far as i was willing to go. A street artist must do at least a little to protect his anonymity after all…

Keen eyed readers will note our plea to be big in Japan. If you could possibly help us sort this out please get in touch as we would sincerely love a trip to Japan – and everytime i think about it i can’t get the song ‘Big in Japan’ by Alphaville out of my head…

The top of the article has been cut off due to the fact that it wouldn’t quite fit on an A4 scanner bed. The title for the piece is ‘Sholto and Hugo make their mark on London’ and comes from the Manx Independent on Friday 24th September 2010. Click on the image for a larger version.

We were at Mannifest last week which is a fledgling music festival on the Isle of Man that is now on it’s 2nd year. We were invited to do some painting (and also djing) at our friend’s ‘Sin Cabeza’ tent. We arrived on the island late on Wednesday and then on Thursday went up to the site to get our boards set up (by our good man Dean – many thanks for that!) and it was then that we made our first mistake. Rather than going out of our way to find some outdoor paint we used some white indoor emulsion that was available on site. When we arrived on site on Friday morning after overnight rain the emulsion had (obviously) all washed off.

The sheet over the top of the boards was our pathetic attempt to hold off any more rain getting to the boards whilst we went in search of real paint. We then got a coat of the good stuff on and waited for it to dry. Not wanting to waste any time we then got on with stencilling various bits and pieces in the tent with a ‘Sin Cabeza’ stencil which we had been tasked with designing.

Sin Cabeza stencil on decks – with the beady eyes of the RedEyeJedi glaring over the top!

The windbreaks used to mark our territory

After the paint on the boards had dried it was on with our first piece – Pandaman!

After a late night on Friday where we definitely had the most pumping (although smallest) tent we were served with the following notice (i’m pretty sure we weren’t the only ones although the following day a security guard said clearing our tent was, and i quote, ‘like World War III’)

Warning! Fun will not be tolerated!

After we got Pandaman finished we let our adoring public enjoy it for all of about 45 minutes before it was time to whitewash the wall and start again. Once we had managed to get it white (we even had to use a little of the emulsion as we ran out of outdoor paint – but thankfully it didn’t rain again) we then moved onto ‘The dog days of summer’

Fairly late on Saturday we managed to get Dog days of summer finished – then it was on with a bit of djing!

After another night of partying we were pretty knackered when it came to Sunday and as we had finished the Dog days of summer so late we thought it best just to leave it for people to enjoy and get on with a little laid back Sunday drinking. I’m not entirely sure which day the shots below were taken but show some folks enjoying the hospitality of the Sin Cabeza tent and the huge wooden statue of Mannanan (a Celtic deity from the Isle of Man). All in all a good year although perhaps they should have made the Sunday a family day as the bar stopped serving at 6 and the venue closed at 9pm. Bring on 2011!

Partygoers at the Sin Cabeza tent

While we were at home the last time we got this piece done for a friend. The video is well worth a watch – even if only for the soundbites that have been edited in:

and here’s a picture of the final piece: