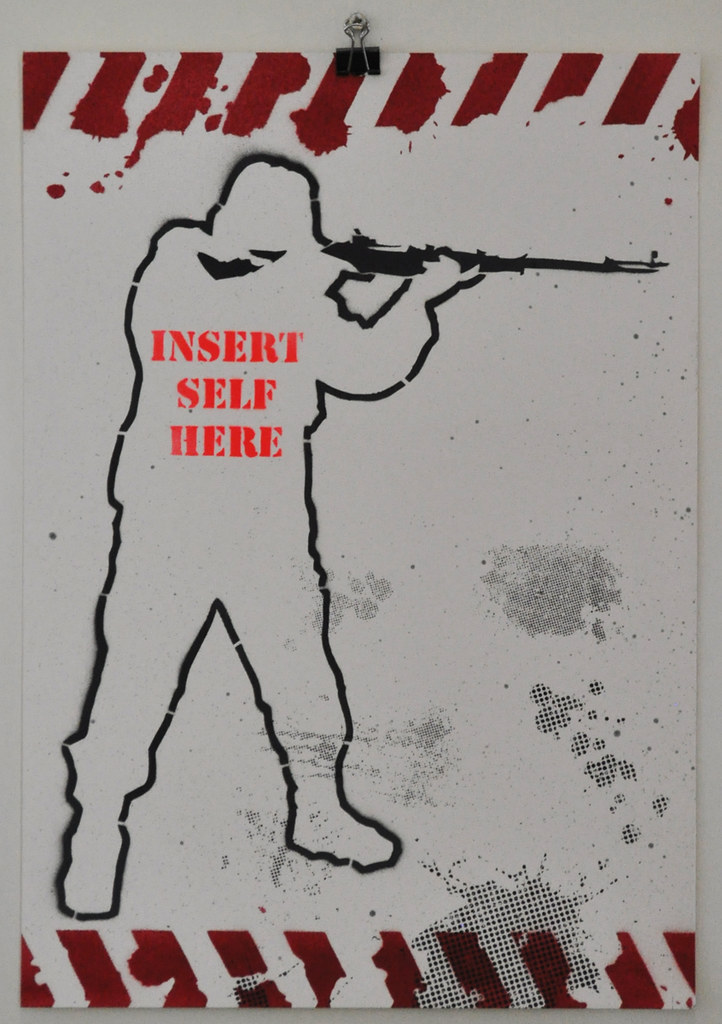 This picture is for all those people in the world who have dreamed of killing a zombie or two, i know i certainly have. Whenever i read a zombie book the phrase ‘inset self here’ always comes to mind especially when things are going from bad to worse.

It’s A3 in size and is made using the magic of spray paint, stencils and paint pen. Signed on reverse. So there I was innocently posting nonsense on Facebook when I get into a conversation with Mr George A Raggett and we come to the conclusion that an A4 art swap was in order. After further discussion it emerges that I would be very much liking something that was all nice and fluffy whilst George was requiring something as dark as could possibly be. Challenge accepted.

After giving it a little thought a quote that is attributed (but not confirmed) to Ernest Hemmingway sprang to mind. Apparently he won a bet by crafting a short story of under ten words. The story was “For Sale, Baby Shoes, Never Worn”. Now that is pretty dark (and very brief). So I thought I’d work with that and give it a little spin by making it into an actual classified ad and including a few cheeky little zombie reference in there just to add a little spice. Once I’d perfected my vintage paper effect with spraypaint it was on with getting it printed and adding in the extra blood splashes and the red circle to highlight the ad. Challenge completed.

I found out just this morning that my parcel arrived safely with George accompanied by the parcel he had sent to me just before Christmas. And there I was imagining the German Postal Service would be efficient… We all know the countless problems the living dead can cause so sometimes it helps to be prepared with handy signs pointing the way to the hungry zombie hordes. This is especially useful if you’re tooled up with the latest in double barrelled shotgun technology. Just remember not to let them get too close – and never let your guard down! The blood spatters pay testament to someone who forgot that…

It may be late in the day but it’s still Friday (I checked) so this definitely still counts as Free Art Friday! We will hopefully have a couple of pieces appearing in this evening’s feature on Free Art Friday on the Culture Show (BBC 2 @ 7pm) so keep your eyes peeled.

The funk of forty thousand years… It’s amazing what a little musical inspiration, some cardboard and a camera can get you. I reckon this is a good case in point. There i was, minding my own business listening to Thriller on the stereo when the muse came down and whispered a plan in my ear. A short while later I had myself an authentic Michael Jackson gravestone and a zombie hand. A homage to Thriller it was to be.

I was originally intending to get this out on the anniversary of Jacko’s untimely demise but unfortunately Glastonbury got in the way so I present it now rather than wait until next time. You should definitely watch the video again in all it’s 14 minute glory. Top notch stuff.

Have you ever wondered what happens to old toys once they have been used and discarded. Well, some of those toys fall between the cracks and end up on the wrong path. Here we have some of yesteryear’s My Little Pony’s back to dispense some justice for being discarded and forgotten so quickly. Watch out…